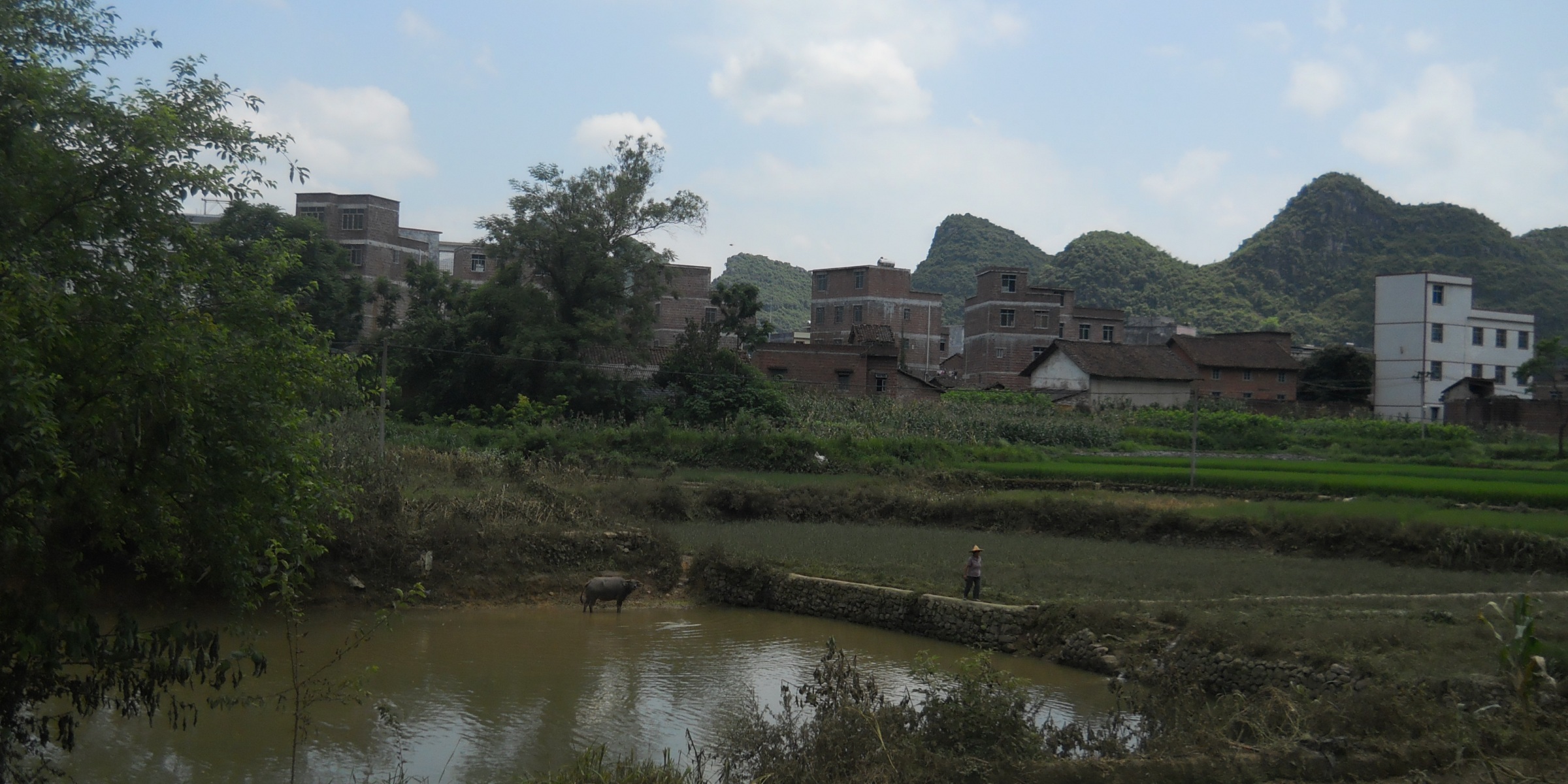 Posted on October 5, 2016 by veritasandvita

We went out to a village today. The road led out of town past the university and into the countryside. It was a a narrow, concrete road wedged between an emerald green river on the right and a gradual incline that eventually erupted into towering rocky crags and cliffs on the left, partially clothed in trees and vegetation of every shade of green I can imagine. The cliffs themselves, a montage of black, gray and white shades, are cracked and weathered by ages of exposure. The sky, a sharp, cloudless sapphire blue. The journey was a fairly early one in order to escape the merciless heat of the sun and allow us time to return in good physical shape. We walked along, periodically passed by mopeds and scooters and the occasional automobile, smiling back at the staring faces that often had never seen westerners before. Some, giggling, would try out the handful of English words they knew, shouting out “Hello” or “Welcome” as they drove by.

While the distance was only a few kilometers, it only required a hill or a curve in the road to lose sight of the city and we found ourselves in the countryside of southern East Asia. Eventually, a village appeared in the distance. We often think of villages in remote rural areas as a ramshackle collection of huts of mud or clay. That is not a East Asian village. Crude, square buildings of brick, stone and other scavenged materials rise up 2 to 3 stories, stark, dark and dilapidated. They rest in strange contrast to the fields, river and mountains that hem them in. They seem almost like an ugly smear marring a pristine canvas or a quilt with a jagged instrument bursting through a tear in the fabric. They simply do not belong.

Our journey took us to two villages, the only real differences being the number and layout of the buildings and the people staring at us as we passed them. The people were few but were available in every age and size. Sometimes friendly, sometimes just curious. And all of them lost in the darkness of ignorance or captive to the lies of the enemy. Corn, melons and many an abundance of other vegetables grew up in every available spot of ground. Truthfully, much of what we saw we could not begin to identify, knowing only that it was both their sustenance and their economy. Occasionally a donkey or a few cattle wandered about staring at us much like the people passing us on the road. They said nothing.

We walked and talked, sometimes together, sometimes separated by the pace of our steps, often lost in our thoughts and conversations with our father on behalf of those living in the villages we passed through and for those in every city and village in the place we have been sent to serve. Prayer is a powerful weapon against the darkness. At the first village we came to we followed a dirt trail off the main road and tromped along till it led us to the river. We sat down under the trees near the edge of a small ridge but decided not to follow the trail down to the bank as there was no shade close to the water. We spent time in prayer, entreating our father for the LZ and M peoples and we talked about a passage in Scripture, looking at it in light of our place and purpose in this journey.

We eventually headed back to the city, hot and tired, but energized inside. We had lunch with friends and had great conversation and fun.

It is also noteworthy that one of our team members is now a professional snake handler. We like to think of the “incident” as him wrestling with the serpent. It’s more inspiring than “helping a local capture dinner” or “it’s not roadkill if it’s not dead yet”.

I have told our team over the past several months leading up to our trip that sharing the Good News in East Asia is different than in many areas where sharing is more open and tolerated. In East Asia it is a personal, one on one (or a few) battle for souls.

It is a street fight.

The evening was another opportunity to gather with our friends in an area of the city filled with food stands where a huge variety of foods were prepared. They brought other friends who did not know the Son, C and L. We ordered quite a few dishes, including one with crickets (grasshoppers) another with snails and several other beef and chicken dishes. The prospects for a franchising opportunity for us was not missed and it is expected that McCrickets will soon be in a neighborhood near you.

Dinner and conversation progressed and our friends brought up the subject of the sone with C and L and what followed was a lengthy conversation of sharing the Good News with them. To our church back home, let it be known that your team shared with love, passion and truth, answering the questions and the anxieties that are often voiced as the seeker struggles to understand and surrender. All of us participated as one team member led, sitting to C’s right. By the end, C was still a seeker but more understanding of the truth than when we had begun. Our friends will continue to meet with them and begin to study Scripture with them in the hope that they will give their lives to Christ. We prayed with them and asked Father to give them understanding and desire to follow Christ.

Sharing the Good News in East Asia is a street fight.

The name of the area we ate in? Food Street.

– The M and LZ of the villages we prayed for as well as the others of the LZ and M.

– C and L as they struggle over giving their lives to Christ.

– Our friends and their church as they adapt to changes in their group that have led mature members away.